VANCOUVER, BRITISH COLUMBIA — 11 September 2017 – Tango Mining Limited (“Tango” or the “Company”) (TSXV:TGV) is pleased to announce that it has signed a three year renewable Services Agreement for Mining and Marketing of Diamonds with Txapemba Canguba R.L (“Txapemba”) which is a Cooperativa Exploração Semi-Industrial de Diamantes located in the Municipality of Cambulo, Province of Lunda Norte, Republic of Angola. Txapemba was granted an 84 square kilometer (“km”) concession for the semi-industrial exploitation of diamonds within the Luembe River basin in an area that was a past alluvial diamond producer and well known for both alluvial and kimberlite diamonds (the “Property”).

Tango will be responsible for capital expenditures associated with alluvial mine design and equipment acquisition and will be the sole operator. As remuneration, Tango will receive 60% of the proceeds from the sale of produced stones. All of Tango’s operational costs are deductible.

The Property is located immediately near the community of N’zagi (Andrada) and 95 km southeast of Dundo, the provincial capital of Lunda Norte, which has a recently reopened airport with direct service to Luanda. Angola, which ranks as the world’s fifth biggest producer of diamonds by value has been actively encouraging foreign investment in its diamond sector under a new Mining Code introduced in 2011, which no longer includes the requirement for Angola to hold a majority interest in diamond mining projects.

Angola’s potential for world class diamond discoveries is recognised by global diamond mining leaders Alrosa and De Beers. Alrosa is the operator of the world’s fourth biggest diamond mine Catoca, which is located 220 km southwest of the Property and within the same geological setting (Lucapa Graben). Angola is an official signatory of the Kimberley Process Certification Scheme and occupied the position of Chair of the Kimberley Process in 2015.

Tango will, over the coming months, complete a full geological assessment of the Property and plans to commence alluvial diamond production as soon as practical.

The Property is located within the Luembe River drainage in northeast Angola and constitutes the bulk of the alluvial diamonds extracted until now in Angola and represent a large fraction of the still existing diamond resources. The Chiumbe, Luembe, Luachimo and Chicapa rivers’ basins deposits are the most important, only surpassed by Cuango River’s. Secondary (or alluvial) diamond deposits were formed in several cycles, starting immediately after kimberlite emplacement (in Cretaceous times, generally speaking). The first secondary deposits correspond to the basal conglomerates of what is known as the Calonda Formation. The erosion of these conglomerates released diamonds that would be concentrated in more recent deposits.

The Property is located within a few km from the Chimbongo and Chitololo alluvial diamonds mines.

The technical disclosure in this news release has been approved by Terry L. Tucker, P.Geo., Executive Chairman of the Company and a Qualified Person as defined by National Instrument 43-101 of the Canadian Securities Administrators.

Such forward-looking statements necessarily involve known and unknown risks and uncertainties, which may cause the Company’s actual performance and financial results in future periods to differ materially from any projections of future performance or results expressed or implied by such forward-looking statements. These risks and uncertainties include, but are not limited to statements with respect to the estimation of mineral resources; the realization of mineral resource estimates; anticipated future production, capital and operating costs; cash flows and mine life; potential size of a mineralized zone; potential expansion of mineralization; potential types of mining operations; permitting timelines; government regulation of exploration and mining operations; risks that the presence of diamond deposits mentioned nearby the Company’s property are not indicative of the diamond mineralization on the Company’s property, the supply and demand for, deliveries of and the level and volatility of prices of rough diamonds, risks that the actual revenues will be less than projected; risks that the target production for the existing mining contracts will be less than projected or expected; risks that production will not commence as projected due to delay or inability to receive governmental approval of the Company’s acquisition or the timely completion of an NI43-101 report; technical problems; inability of management to secure sales or third party purchase contracts; currency and interest rate fluctuations; foreign exchange fluctuations and foreign operations; mineral title; various events which could disrupt operations, including labor stoppages and severe weather conditions; and management’s ability to anticipate and manage the foregoing factors and risks. 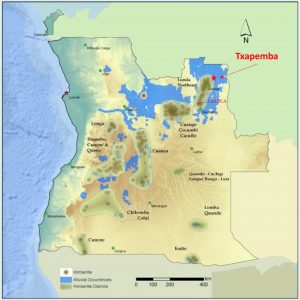